What’s The Deal With Retrogrades in Astrology?

Everyone’s been talking about retrogrades- and mercury retrograde, and what’s the deal with retrogrades? And why are they so bad? And what’s going to happen when the next retrograde happens? Or IS happening? So I’ve got the simple breakdown and some pro-tips for you!

All planets have a time period where they appear to be moving backwards from our perspective on Earth, and this is what’s known as the retrograde period of that planet. Astrologically the retrograde period signifies the areas that planet influences working in a different way than usual. Almost as though it was backtracking on it’s normal course of action- and thus, creating that similar effect in our lives. 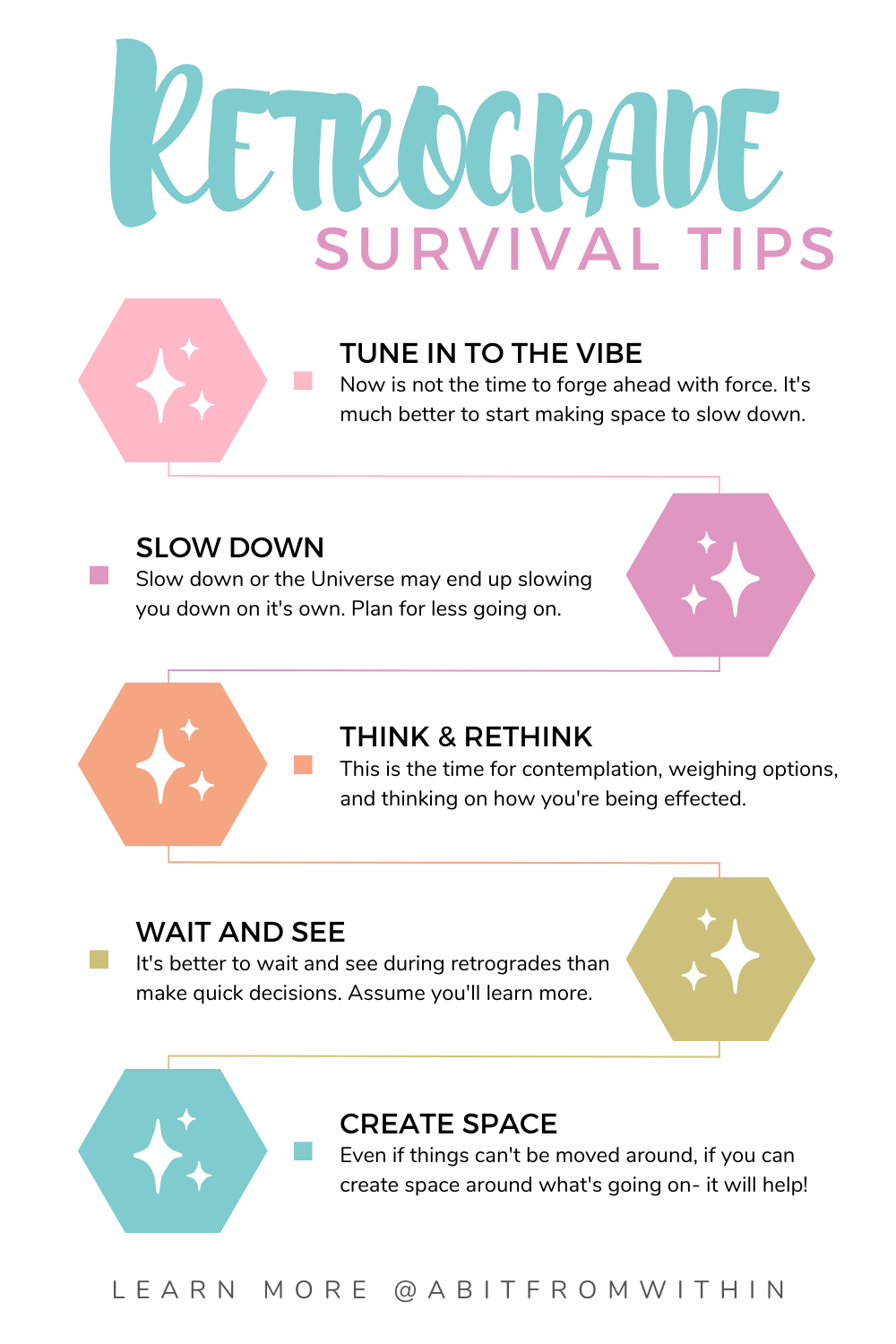 Mercury, Venus and Mars (the personal planets) are known as much closer to Earth and their movement around the zodiac is faster than that of other planets. These are the contributing factors as to why they personally effect us much more! The other planets (Jupiter, Saturn, Uranus, Neptune, and Pluto) spent long periods of time in retrograde every year in retrograde which is why we don’t talk about it as often, nor feel the effects as apparent.

WHEN DO RETROGRADES HAPPEN AND FOR HOW LONG?

Because this one happens most often, it’s also the most well known. Mercury rules all kinds of communication and coordination. It’s known for being able to take in, distribute, and share ideas that are both conscious and unconscious, especially on a day to day level! When we thinking of talking, writing, sharing, traveling, analyzing, making decisions, understanding and expressing- all of these things fall into Mercurial domain. So when this energy flows in the opposite direction we really notice the effects: deals that were supposed to go through, don’t. Words are misinterpreted or misunderstood. Plans we thought were set get changed. Things we thought were relatively in our past reappear for us to reconsider and finish up. It’s a lot!

Venus retrogrades you’ll see shifts in the areas that Venus rules: love, beauty, art, and money. I often joke with my clients whenever we begin to talk about Venus that we’re talking about the areas of great happiness in life because in our often capitalistic society we understand the way love and money can bring happiness to our life. Think of these things we appreciate as humans and the way we want to experience luxurious experiences in our life by enjoying the aesthetics around ourselves. During Venus retrograde you may feel swayed by high emotions but it’s important to remember to act with care and caution. It’s not a wise time to make permanent or lasting decisions or changes during a Venus Retrograde- if it can wait until afterward and you still want to move forward, then you know you’re good.

Mars is the planet of action, passion, and intensity. It’s often associate with war, aggression, and masculine forms of energy output. Mars in forward motion wants to forge ahead, move impulsively, and have its desires met. When Mars goes retrograde it’s a time when the usual forward momentum really starts to feel sluggish and frustrating. I think this is true of all personal planet retrograde periods, but especially for Mars it can show up as anger, impatience, and giving up too quickly on things.

WHY DO RETROGRADES GET A BAD RAP?

As astrology has made its way through pop culture, retrograde periods have gotten a bad reputation almost as though it was some curse lingering over us. I don’t want you to think of it this way. Many of us are born with retrograde energy in our chart, and honestly retrogrades are no different than times when the tide is going out and times when the tide is going in, or the energy of the moon waxing to full or waning to new. They’re different, and they serve different purposes.

THE VALUE OF RETROGRADE PERIODS

So with ALL of that being said, the most important thing you can do when retrogrades come along is: SLOW DOWN. If that sounds simple, it’s not. It’s really hard to slow down because most of the time you’ll feel as though life has decided you should move forward anyway- and it’s really hard for most of us to be patient and flexible enough to truly sit with ourselves and see if this is the right decision to make. 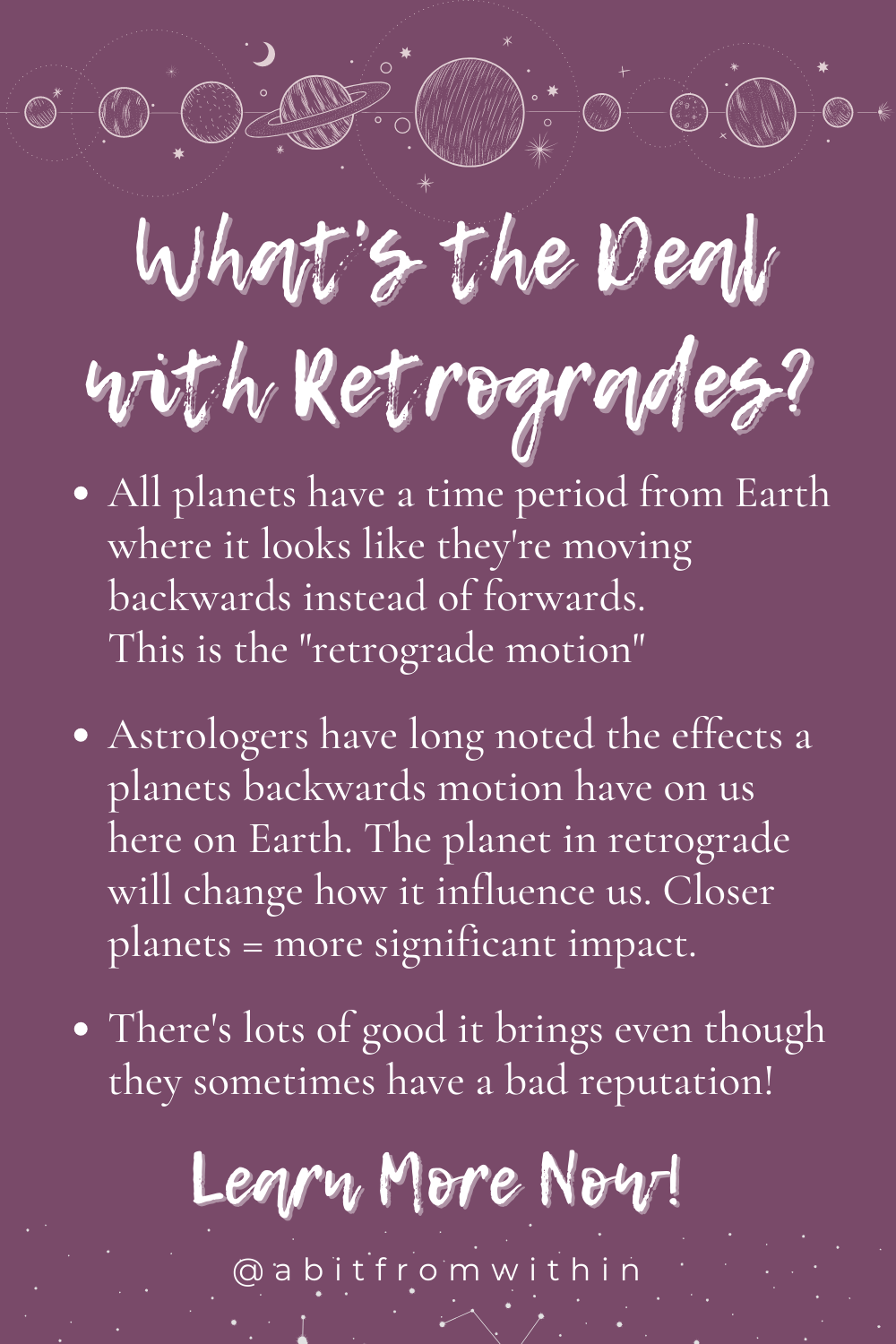 There’s so much more that can be shared on this issue so I highly recommend tuning into the sister episode of The A Bit From Within podcast where I’ll not only share a bit about the astrology but more so dive into how you can slow down and create space in your life even when it feels like you can’t.

Listen here now, or on Spotify, or Apple Podcasts (or wherever you love to listen). And of course, feel free to share this with your friends who need to hear this too!