One thing I love about astrology is the many ways we can see ourselves in the beautiful collection of signs that create the zodiac. As we become familiar with the different qualities, we see that some are fixed while others are more mutable.We So even those of you whose chart is filled with fixed signs and you find yourself more stubborn and resistant to change, we still know that we live in a world that is constantly changing- and that WE change too over time.

For me, my work has always been the central chamber of growth in my life. Whether that’s the business I opened 7 years ago, the projects I took on during undergrad, or the revelations I’ve had since becoming a yoga teacher and working in the mind, body, spirit community. It’s through my interactions as a person being in service to the world that I’ve grown so much.

I realize now that so much of what I used to think and how I used to operate did not serve me well! So I’ve singled out 3 things I used to think that now I think differently about. These are 3 revelations that have changed my approach to life and business for the better. I think no matter what you’ll likely resonate with bits of my sentiments, but especially if you find yourself in a place where people want things from you on a regular basis. 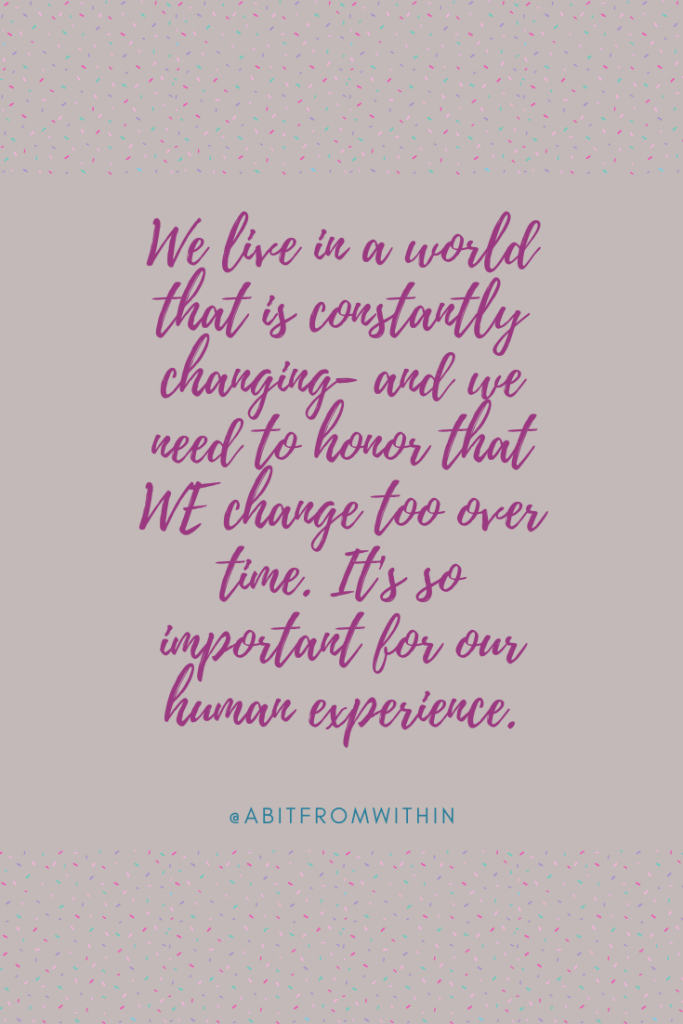 I used to think everyone needed to know everything about what I was going through, what I was processing, how I was feeling, but now I realize that it’s more than okay to evolve privately while gently taking new steps forward. In fact what really influenced this change of heart was Brené Brown’s quote, “I don’t share anything until my feelings and growth aren’t still dependent on it.”Finally, remember that’s we ALL have things that we struggle with. What others post on social media is very often not their entire lives. We’ve all seen it where a couple we’ve envied suddenly breaks up “out of nowhere” or a friend we haven’t talked to in forever but just have seen through social media shares about her struggles with getting pregnant, etc. You may think you’re the only one struggling with what you’re going through- but you’re not. We’ve all struggled in our own way, and it’s a constant journey.

When I heard this I realized that’s exactly what I had been doing, was feeling obligated to put things out there that my feelings and growth were still dependent on. Especially with my business! There were so many times when I’d be working through something and feeling like everyone had to come right along with me or else I’d lose them.

2. I used to think I had to say yes but now I realize I get to say no.

This is a big one for all of us who are people pleasers! It’s really hard when people you like come to you for something you might be able to help them with, only to be met with your no. For so many years I would feel so horrible if I said no, or felt like if I did that I would let them down so much- but over time I realized that people are WAY more resilient than I gave them credit for. Maybe that sounds bad, but it’s true.

Subconsciously, I was putting myself in this role of rescuer. And when I bent over backwards to come through for someone only to realize it didn’t mean as much to them as I thought it did, and that they could have been just as happy with someone else’s efforts- that’s when I realized wow, I GET to say no when I need to.

This one really has to do with owning my own decisions around what I have time and energy for. It’s still not second nature to me, it’s something I have to actively practice- but having systems built around my availability helps, and so does continuous practice of saying no when I need to.

I used to think that when things were hard that it meant I was really getting somewhere or doing something special- but now I realize that signs of struggle and resistance- that feeling of things being ‘hard’- are indications that I’m acting out of limitation or fear, or that I’m really out of alignment with myself. I realize that where there is ease so is alignment! Things go more smoothly (even the big things) when I am in a place of allowing.

I’ve found this to be true in many areas of my life that I’m passionate about. Like my relationship- I’ve had plenty of times in the past where for whatever reason I found myself in a fighting mode- where something was going on that was making me feel afraid or resentful and I was acting out of this place. I thought this is how it always had to be. And you know what never got solved were any of the fights we had in these places. Now I’m much better at waiting and giving space to my own personal feelings until I can more calmly ask for what I need or share how I’ve been feeling. This creates far more ease in our communication- and our relationship actually progresses. 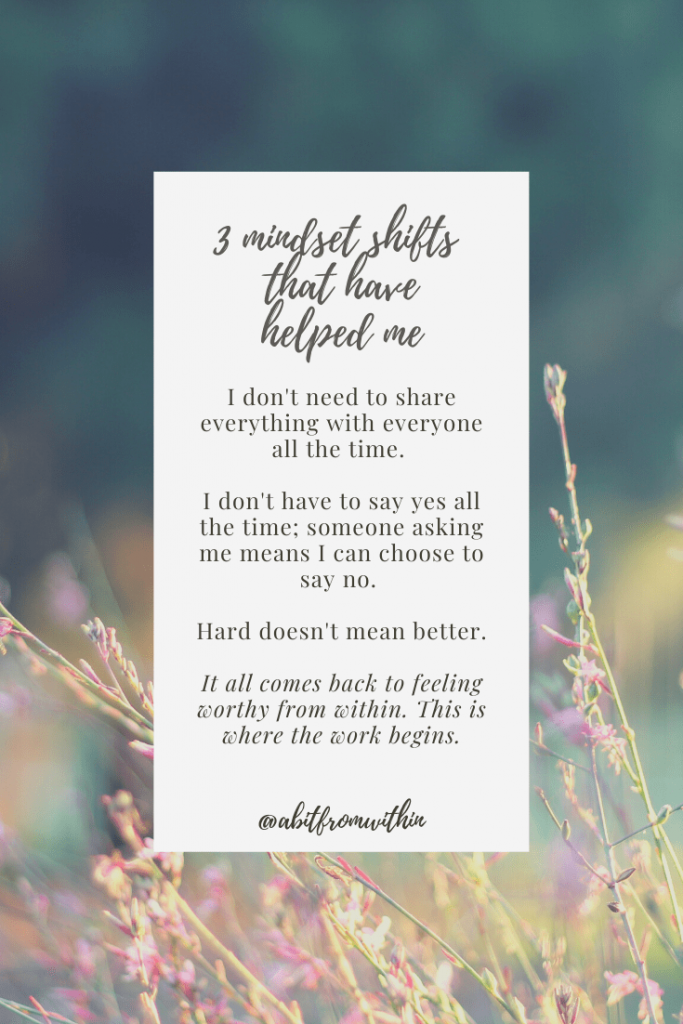 I’ve also found this true in business. I used to feel I had to wear every single hat and slave away on every project in order for it to be successful. I would put so much burden on my own shoulders. But when I realized that I could ask for help with these tasks, and I could find amazing people who could do things that needed to be done better than I could do them- things got easier. It’s still tough at times to be the business owner and know it comes down to my direction and decisions- but it’s so much easier since I stopped doing all the things I struggle with.

I’m so glad that to have found these shifts in my beliefs and mindset. It’s not perfect all the time- trust me. Every day I am working on practicing what I preach, and living what I know to be true. (And often I struggle). If you related to some of these topics feel free to check out the sister podcast episode where I discuss all these things more in depth and share more of what’s on my heart (that little bit from within).