Knowing how to deal with each moon sign is a power that is not as commonly discussed, and if you know someones moon sign it can give you a TON of information on how to best interact with them!

In astrology the sign the moon was in when we were born (natally) is an indication of how we process emotions, how we interact with others more intimately (as this often deals with our emotions) and the deeper parts of ourselves that sometimes we show, but sometimes show between the lines of what we are or are not saying.

As an astrologer I highly recommend not only knowing your own moon sign, but the moon sign of everyone important in your life! If you need, here’s a quick tutorial on how to find your moon sign.

One thing I’ve found as an astrologer is that sometimes zooming out ever so slightly can help us identify the broader strokes on how to best deal with each sign! So for this article I’ve grouped each moon sign by their element to share some important info about each group! 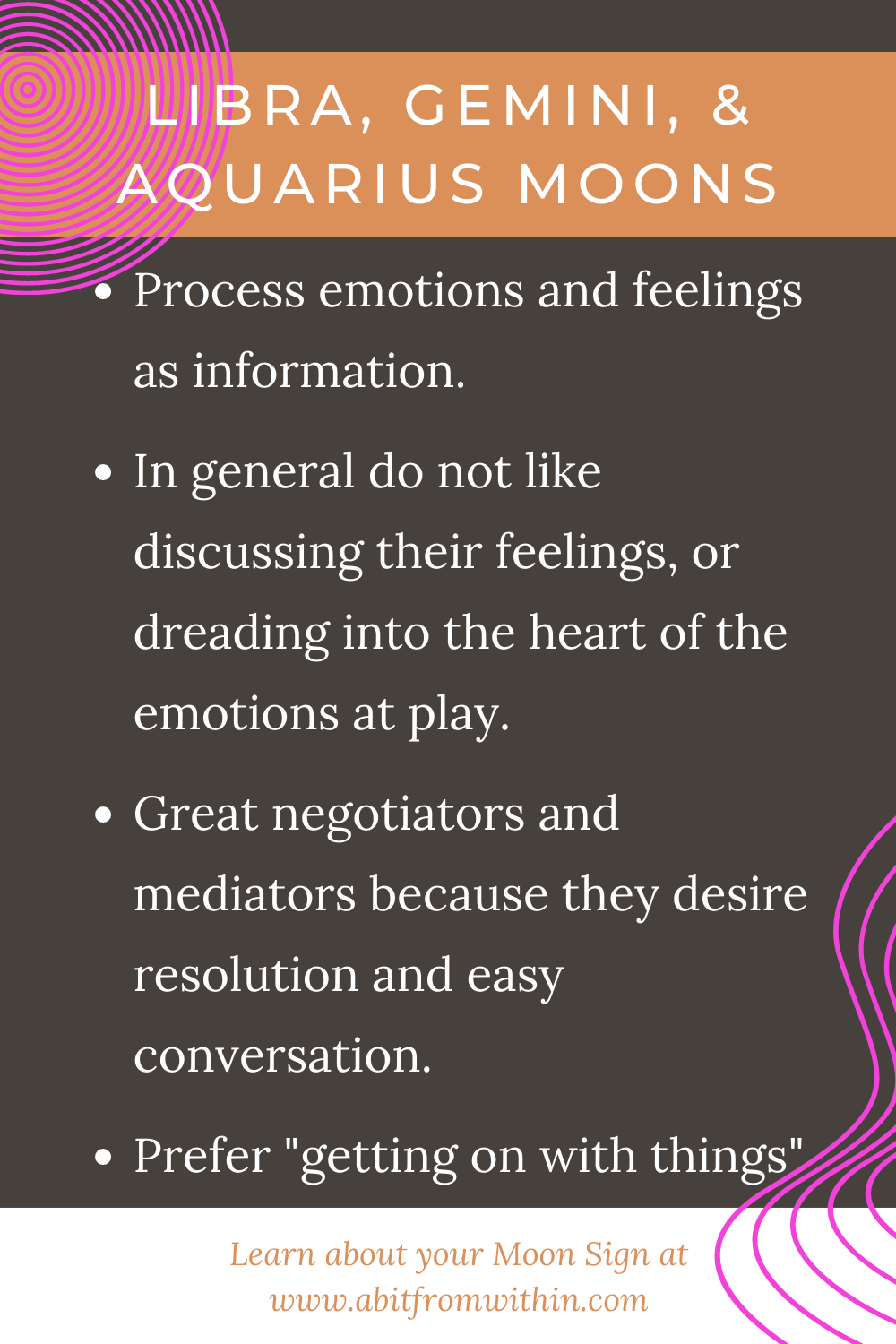 When it comes to air sign moons there’s a huge amount of rationality and processing emotions as feelings. It’s uncomfortable for them and most often- they’re not going to want to do it.

That said, many air moons are still huge fans of talking in general- and some may fall into the category of loving to talk around their feelings, love to talk about the ideas of what’s going on, especially love to discuss the intellectual aspects of understanding the feelings- but actually sharing how they feel is a different story.

Most air moons I’ve known have a tendency to want to get the conversation over with ASAP. Some of the best negotiators and mediators are air moons and this is because of their desire to get the conflict part over with.

They’re even able to keep a separation between the drama/emotion of the moment and how they’re understanding it- which could come off as detached although they wouldn’t describe it that way. Air moons strongly feel that they’re just logical and rational.

Best practice with Air Moons: get to the heart of the conversation and then move along as quickly as possible.

Water moons are natural feelings keepers, which I don’t think comes as a surprise to anyone who has one of these moons or knows someone with the sensitive moon. It’s important to note that sensitivity doesn’t just mean being emotional or sentimental, it can also mean being highly aware and when it comes to feelings- these people are.

They’re so sensitive and empathetic that they often pick up on the emotions of everyone around them, and the emotions of others affect them strongly.Water moons can hold on to a lot. For example they’re often holding space inside for their own feelings, but again the stress/emotions of those they love, or even the emotions of the moment or situation they’re in. Because of this, they are often less movable when it comes to their feelings.

One thing that’s key to dealing with a water moon is that trying to appeal to them with logic or rational will not work! It’s not that they don’t understand what’s happening on a logical level, their minds can absolutely understand- but what doesn’t change is how they feel and what’s going on inside of them. 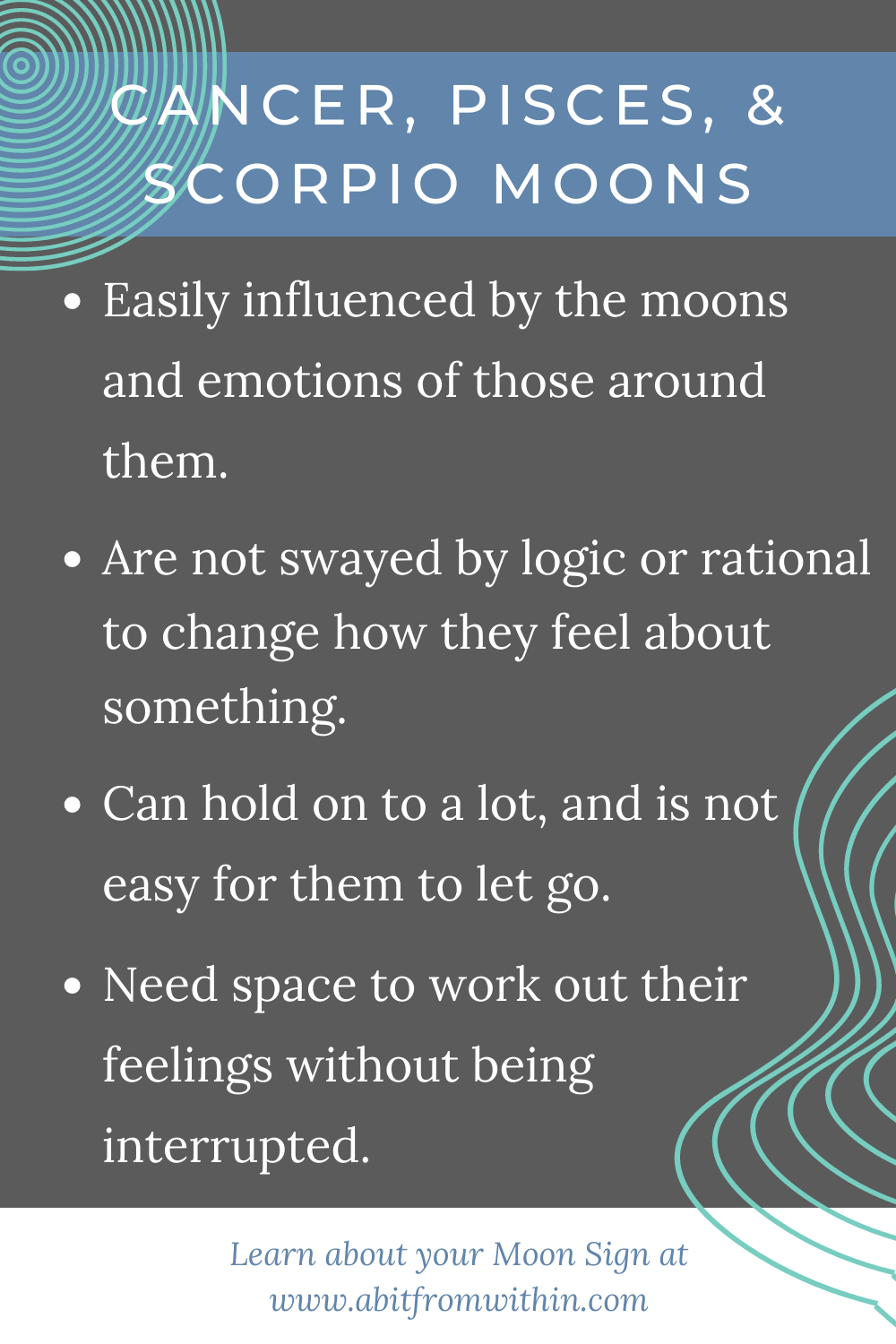 Best Practices with Water Moons: You cannot rush the process for water moons. Let their feelings run their natural course. Listen fully to them and give them space to feel and express without being interrupted.

With the Earth Moons there’s a steadiness and stubbornness when it comes to how they feel about things. This is mostly due to the fact that when they finally arrive at a conclusion, it’s one they’ve put a lot of thought and energy into and have ultimately concluded that how they’ve come to feel is the “right” feeling to have. 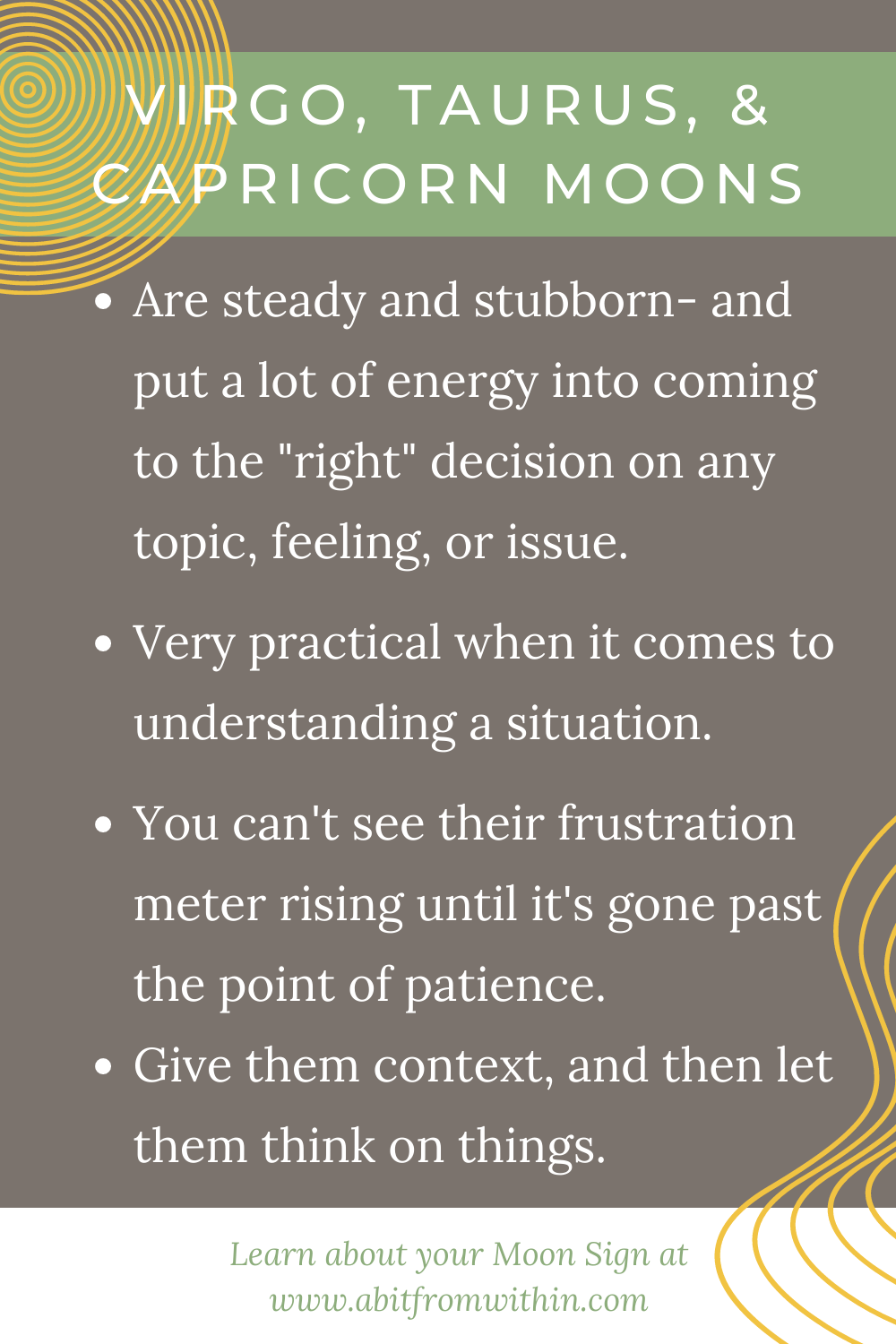 Earth moons are extremely practical and are the first to be able to incorporate new context or updated information into their understanding of a situation. With that in mind it’s also good to keep in mind that you’re not always going to be able to visibly see their frustration meter rising, so if you decide to press your limits, you may end up on the wrong end of the stick and have pushed them too far to the point where they will show a strong reaction and one that they don’t like displaying.

One thing that’s important to note is they are not the fastest with emotional reactions. In fact, sometimes it can take hours or even days to finally start to realize what is really going on inside of them. There’s just a lot of factors that they work through as they reckon with how they think and feel.

Best Practice with Earth Moons: Give them the context/ all the information they need in advance, and then leave them alone for awhile to think on things. If you can do this they’ll probably up coming back with a beautiful perspective on things and a good plan to move forward.

When it comes to fire moons they are the most important to remember that their first reaction is not their one and only, or complete stance on the issue at hand. Generally there’s a strong initial reaction that will settle once they’ve had time and addressed the energy that was stirred up inside of them.

Fire moons especially need an outlet to channel their emotions! Fire moons are really good at putting their emotions into something else- going for a run, lifting weights, a game of basketball, jamming out on their guitar or drums, or another form of creative expression. Usually something that involves some kind of intensity.

Give them the chance to go get the emotion/energy out physically and usually they’ll come back with a different response- and sometimes it’s suddenly not caring about that thing they were just super passionate about at all. 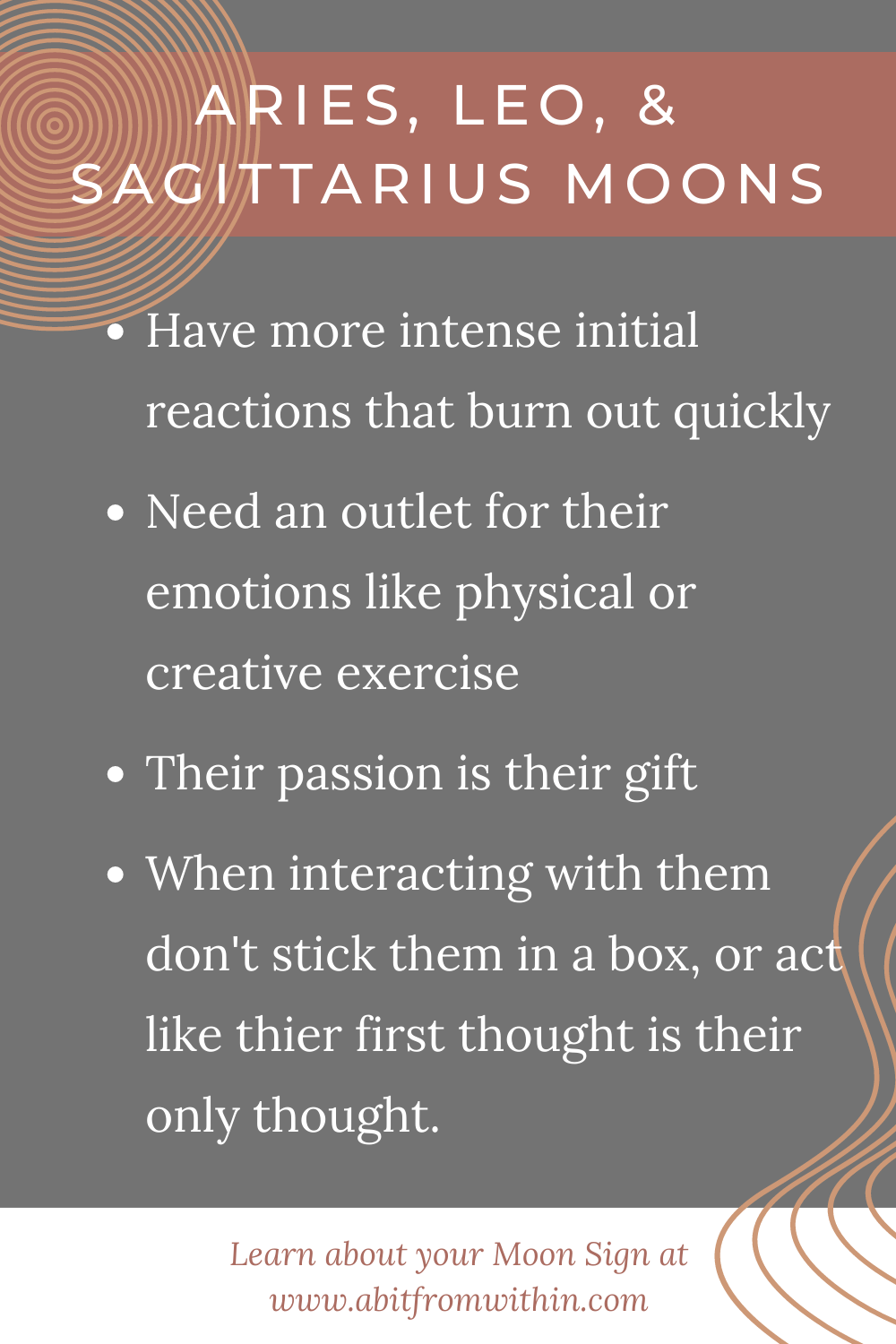 Best Practice with Fire Moons: don’t stick them in a box or hold them to their first thought. Don’t smother them with having to stay and figure it out in this moment- in almost all cases it’s good to let them go get out their feelings, come back, and see what’s shifted.

I hope it goes without saying that this is a generalize approach to each sign, and by no means is it 100% accurate as with astrology everything depends on the personalized nature of your own birth chart. Your other planets, the houses they fall in, and the interactions they have with one another mathematically could cause variations/deviations of the following. If you’d like to learn more about your own natal chart, book a natal chart reading with me!

For more on this subject, I’ve discussed these signs along with a bigger topic around understanding the seasons of our life, and accepting others for who they are! Listen to the A Bit From Within Podcast right now, on Apple Podcasts (or wherever you love to listen) and feel free to share this with your friends who need this message too.